My friend stood in the back of a very long line. She had arrived forty minutes early for a job interview, and forty gray-suited men stood in front of her, slowly being ushered through security. She quickly did the math: forty people times 75 seconds per screening equals LATE.

For each one: bag check and ID check, name tag and phone call. Next! Next! Never.

There she stood, in a bright red coat and a smart black hat, like an errant kite swept into a storm cloud.

A word from Scripture had echoed in her head all week: Pursue. So, she did.

And then the next man: same question, same response. Again and again.

Soon, my friend reached That Man. “I could tell he was from New Jersey,” she told me. Uh oh. She and I are both from New Jersey. Where was this going?

In seconds, my friend was standing at the security desk, with murmurs of “Good luck! Good luck!” swelling behind her. A minute later, she was in the elevator and on her way.

The interview itself was dispiriting. An hour later, my friend shrugged herself back into her red coat and black hat and stepped again into the reception area.

And there clustered the same forty men, returning from their own meetings. They beamed when they saw her again. Greeting her like a old friend, they wished her well.

I tell my kids: never miss an opportunity to be kind. While we all miss opportunities, it’s still a good guiding principle.

I also offer its corollary: allow another person to be kind to you. Despite the motivations of self-interest, this one can be harder. Whether impelled by my stubborn self-sufficiency or pointed self-criticism, I frequently choose to gut it out myself rather than risk vulnerability or judgment.

And yet I also believe that allowing another person to be kind is itself an act of kindness.  My friend saw this: she took a chance, asked a favor — and brightened the business day of the gray-suited men, precisely because she invited them to show kindness to a stranger.

Naturally, she was grateful for scooting to the front of the security line. But I wonder also about the gratitude of the men. How many described that moment to their families? How many enjoyed the serendipity of their reunion an hour later and the sincerity of their own well-wishes?

I know I feel shivery inside when I do a kindness. The feeling lingers. It lightens my next few steps and deepens my next few breaths. I commit to myself: do that again.

And then I don’t. At least until someone waves an opportunity right in front of my face.

They thank me for my small kindness, but perhaps I should thank them instead — for making that moment of connection, piercing my focus, softening my heart. Be kind to me, they say. And suddenly I am.

And you are too. Kindness comes easily to you.

Now I challenge you: return the favor. Give someone the chance to be kind to you. Savor the connection you’ve just created. Watch the effect on them and study the effect on you.

My friend — in her memorable red coat — gave forty gray-suited men the chance to do a tiny kindness that summed to a meaningful gift. Who came away richer? 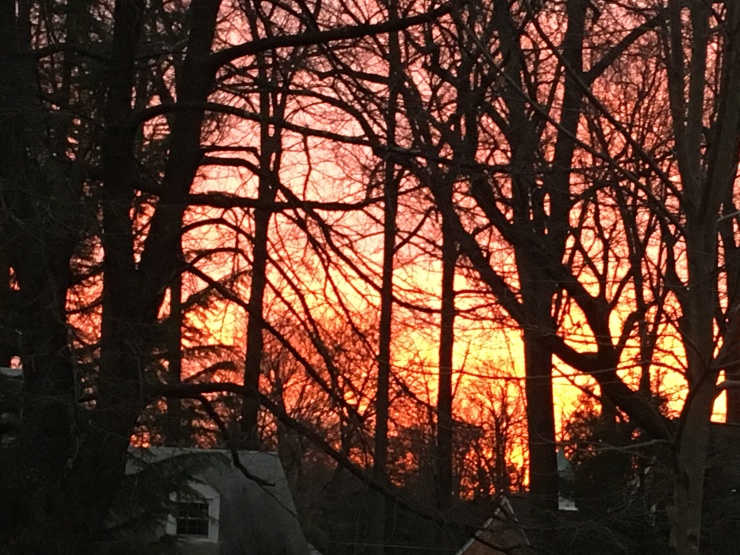 I wrote this piece for Five Minute Friday, a faith-based community blogging site at  https://fiveminutefriday.com/2019/04/18/fmf-writing-prompt-link-up-next/ . Scroll all the way down and check out the other short essays on the topic of “Next.”

7 thoughts on “When Inviting Kindness is Kindness Itself”

@redtruckbakery and my friends surprised me with a hand-delivered cake during my retirement party. Read about this and other delights on my blog Fashioned For Joy (link in my profile).
Photographed in 1933, my 17-year old Dad played with the Wolverines Athletic Club in Monmouth County, NJ.
Who needs to be calm?! Baseball is back in Washington DC!
A year ago, Kevin and I savored Mexico. This year my delights are closer to home.